Testing and Local Development with MSSQL (1 of 2)

The most challenging part of designing an effective automated testing strategy is accurately simulating databases. Microsoft’s SQL Server (MSSQL) is particularly irksome because of its large footprint, lengthy startup time, plethora of configuration options and ability to store custom logic (stored procedures, user-defined functions, …). These characteristics make it onerous to materialize production equivalent instances within automated pipelines efficiently. This post is the first in a two-part series demonstrating a technique to assuage said difficulties.

The time-constrained can jump directly to the TL;DR.

Microsoft’s relatively recently1 released MSSQL container images - available for both Windows and Linux - are a giant leap forward for local development and automated testing (see the Docker hub repo for full details). While it is possible to use local installations of MSSQL, the most notable advantage of containers is configuration management. Installing, patching, and maintaining MSSQL installations across an array of build servers and development machines is expensive. Thanks to the magic of containers, it’s easy to construct fully-featured instances with full fidelity across many environments. Try it yourself using the shell command below2:

Take special note of the two environmental variables specified in the command above. ACCEPT_EULA confirms your acceptance of the End User Licensing Agreement. Omission of this variable results in failure to initialize. SA_PASSWORD is also required - it, as the name suggests, sets the System Administrator (sa) password. The MSSQL Password Policy specifies the minimum complexity requirements. A non-compliant password results in a silent failure. 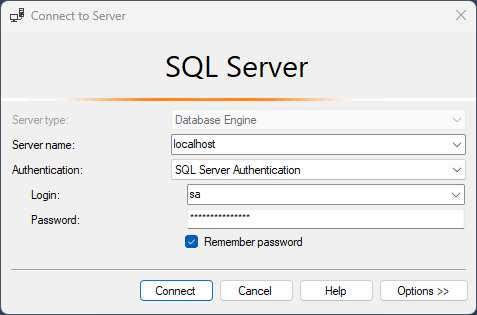 MSSQL containers are ideal for local development and automated testing. There are, however, a few obstacles that are worthy of mention. The licensing restrictions differ based on the supplied MSQSL_PID environment variable. The default value is Developer, which is free for non-production use-specifying other values such as Standard or Enterprise subject the container to the same licensing fees as its non-containerized counterpart. Some advanced features such as replication, SQL agent, and full-text indexing aren’t supported by default 4. Additionally, the ephemeral nature and performance impediments posed by MSSQL containers may deem them unsuitable for production workloads. There are options to overcome these limitations, but they are outside of the scope of this post.

Given the ability to easily create and destroy instances, the next challenge to overcome is initializing a database and associated schema5.

To obtain the Data Definition Language (DDL) scripts from the database under test, one could use the SSMS GUI to generate scripts; however, that’s not conducive to automated testing. A better solution is to use mssql-scripter, a command-line utility that duplicates Management Studio’s scripting capabilities.

It’s a great tool; however, it has a notable flaw: dependency on an older version of libssl6. Running it on an active machine isn’t advisable. A dedicated mssql-scripter container is an excellent option because it sequesters the outdated library from the rest of the system. To create the container image, start with the docker file below:

The shell command above generates a schema.sql file containing all the DDL scripts required to create an identical database complete with all its components (tables, functions, stored procedures, …). The final puzzle piece is to execute the SQL script against an MSSQL instance.

Once again, it’s entirely possible to invoke a DDL script using a GUI tool like SSMS; however, this is problematic from an automation perspective. A better option is to use the sqlcmd utility baked into the base image. sqlcmd reads Transact-SQL statements from a command prompt and sends them to an MSSQL instance 7. See the usage guide here. Experiment with the commands below to familiarize yourself.

Invoking the DDL script is as easy as copying it to a container and sending it sqlcmd as shown below.

The result is an MSSQL container populated with a database and associated schema. Additionally, the container has guaranteed fidelity with the target. The tools required for robust automated testing and local development environments with MSSQL are present. As a bonus, installing any software (other than a container platform) is unnecessary 8.

MSSQL container images, mssql-scripter, and sqlcmd make it relatively easy to build robust automated testing and local development solutions. For most situations, the process outlined in this post is more than sufficient. The major drawback to this approach is efficiency. Generating and invoking a DDL script is relatively expensive. The next post in this series outlines a process for embedding a schema directly into a container image.

The end-to-end process for creating MSSQL instances for test and local development that are guaranteed to have fidelity with their target environments is as follows:

2. Generate a DDL script from the target database
3. Stand up an MSSQL container instance (accessible on localhost:1433)
4. Copy the DDL script into the running container
5. Invoke the DDL script using sqlcmd


While this is sufficient for most applications, generating and invoking a DDL script is relatively expensive. The next post in this series outlines a process for embedding a schema directly into a container image.

Callibrity Expert Callibrity is a software consultancy specializing in software engineering, digital transformation, cloud strategy, and data-driven insights. Our national reach serves clients on their digital journey to solve complex problems and create innovative solutions for ever-changing business models. Our technology experience covers a diverse set of industries with a focus on middle-market and enterprise companies.